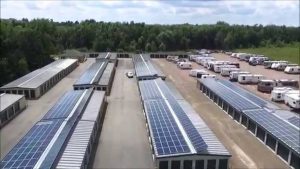 I’ve noticed a trend over the last year of large property owners–including the big Self-Storage companies–investing in roof-top solar panels. It got me thinking…could the real estate on your roof be an underrated or overlooked part of your facility?

So I decided to have a chat with my friend, the media personality, sustainable energy consultant and all-around great guy, Rob Gell. Rob’s company is called ReThinkSustainability.

Rob told me that there are many companies looking at the potential of their roof space right now, especially with regard to solar panels. In the past, solar panels on the roof generated energy which was used to run the building, with any excess being fed into the grid.

But as Rob explained to me, there’s a new phase in on-site energy generation coming.

This will involve the development of what’s called a VEN–a virtual energy network. This means that one large building with panels on the roof will supply energy to neighbouring residential or commercial building, without going through the traditional retail processes.

This is exactly the kind of thing I’m excited about, because it aligns with our model as Self-Storage fans: it’s effectively no different from your neighbours buying storage space from you. In selling to a VEN rather than a grid, you’re not locked in to the grid price (the national energy system is like a monopoly) and you’d be removing the middle man from the equation.

Mind you, not every solar panel company can give you access to a VEN.

It sounds like the same concept as a Self-Storage facility, i.e. subdividing one resource into multiple parts for multiple customers!

Fort Knox (VIC), Kennard’s, National and Abacus have all committed part of their roof real estate for energy generation, according to various articles I’ve spotted.

In addition to that, Rob told me that state & federal governments have re-packaged their solar incentives with further subsidies to encourage more sustainable infrastructure to be built.

Anyway, it’s a complex and exciting area, and there is lots to learn!

Rob and his partner Justin will audit your site for its energy potential and prepare the specifications for tender, so you can be sure you’re finding the right system for you.

They’ll also answer any questions you may have. Please let me know if you would be interested in having a chat with them.

You never know–this could prove to be a fantastic way to reduce your expenses and increase your income. Best of all, it could allow your facility to be self-sustainable and less reliant upon power companies.

(BTW, I have no financial interest here, other than this: if you increase the income of your property, it’ll be worth more when it’s time to sell!)

National Self Storage takeover — Abacus buy-up is back on again!